Lord of the Rings is of course a highly popular and influential franchise; beginning with the source novels from the 1950s, it's gotten all manner of adaptations to radio, film, television, stage and even video games, and it shows no signs of slowing down.  Interplay, a name pretty well established in the RPG field with games like The Bard's Tale and Wasteland, created two different adaptations of Fellowship of the Ring - a 1990 computer RPG similar in design to the Ultima games, and a 1994 action-RPG for the Super Nintendo.  The 1990 game is pretty solid for what it is, having you venture around Middle-Earth as Frodo and friends and following the overall plot of the book pretty closely, though with quite a bit of side-content added for variety and even quite a few new characters can join the party to aid you.  It is rather light on actual role-playing elements, that said - there is little, if any, opportunity to customize your characters' abilities and equipment (all you get is one weapon and one piece of armor), most puzzles just boil down to "use the right skill at the right place, and if you don't have a character with that skill, recruit one", and combat is pretty shallow overall, mostly just coming down to trading blows with monsters and hoping your dice roll better than theirs.  This version did get a sequel as well as a CD rerelease, with the CD version providing a much-improved UI (including a minimap and no longer having to look up story paragraphs in the manual) and utilizing some clips from the 1978 animated film at key story moments.  While it's still not an incredible game by any stretch, it's a solid enough adaptation of the books and will probably provide some entertainment for die-hard fans. 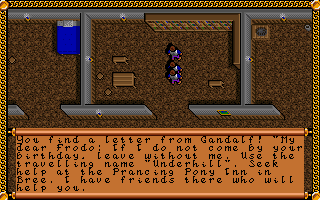