YIIK is a game that clearly wanted to be seen as something profound, but mostly just feels like a series of comically misguided mistakes.  Combat utilizes timed button presses and minigames akin to games like Paper Mario and Undertale, but ends up being so drawn-out and arduous (normal enemy fights can easily exceed twenty minutes in length, to say nothing of bosses) that you'll get tired of it very quickly.  Its protagonist, allegedly a "flawed person you'll come to like on his journey" does no such thing, mostly coming off as a manipulative sociopath who never even thinks twice about all the damage he does, let alone attempt to make amends or become a better person in the end.  The story is Persona 4 crossed with the worst kind of I-read-the-CliffsNotes-version-of-Schrödinger-and-Nietzsche-and-now-I'm-above-it-all shlock, with droning walls of badly acted, redundantly worded purple prose that try so desperately to sound smart and poignant and are mostly just grating and self-indulgent.   But what really sours the milk for me is the creator's attitude.  His reaction to criticism of the game was to simply attack its detractors, claiming that "video games are for babies" and that they just aren't smart/mature enough to understand his big important masterwork.  No guy, we get it; unlike you, though, we recognize it as yet another piece that calls itself  'revolutionary' and 'poignant' when it's shamelessly derivative, self-aggrandizing and lacks any genuine appreciation of the other works it's clearly cribbing from.  You've fallen prey to the same trap so many other dollar store visionaries do, completely discarding the ingenuity and passion behind games you allegedly admire and instead saying "Wow, this sure is popular; if I make a knockoff of it to serve as a vehicle for my own half-baked philosophical views and disingenuous moralizing, then I'LL be regarded as a genius too!  Hey, it worked for Bioshock!".  Too bad you also forgot that for every knockoff game that breaks even, there's at least a dozen that are quickly discarded and forgotten.  Persona itself even has some perfect examples; you sure as hell don't hear anyone talking about Mind Zero or Tokyo Xanadu or Conception these days, do you?  (And to further cement my point: all of those games are less than ten years old.)

Oh, and as the TV Tropes page for YIIK points out, this isn't the only time the author has embarrassed himself like this.  He even had the gall to make a protagonist of his previous title (Two Brothers) soapbox for him in this one, dismissing poor reviews leveled toward that game and not even bothering to acknowledge the fact that the brunt of player complaints stemmed from it clearly being unfinished and containing numerous game-killing bugs that he simply never bothered to address.  It's one thing to make lousy, self-indulgent games, but it's another altogether to write off even the most earnest of criticism and be a giant baby about the fact it exists.   I hope that in time the author will learn a lesson in humility and how to take critique in stride, and that one day he'll be able to parlay that into creating something good from a place of genuine passion, but it's abundantly clear that won't be happening anytime soon. 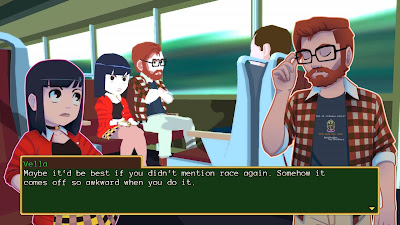