Wizardry V: Heart of the Maelstrom

Wizardry IV was the last game in the series helmed by both of the franchise's original creators and for a time, it appeared that it would be the last in the series due to steadily declining sales (4 in particular doing very poorly owing to its sadistic design).   The fifth entry in the series was headed by David W. Bradley and originally pitched as an unrelated title, but reworked to fit into the Wizardry franchise (and held back from release for over two years while work on Wizardry IV was completed).  Fittingly, the game was marketed as "breaking away from the Wizardry of the past" and featured, for the first time in the series, a substantially overhauled visual style and user interface, as well as a much more intricate dungeon that put equal emphasis on puzzles, storytelling and combat.  At its core, though, it remains very much in the vein of its namesake - punishingly difficult dungeon crawling that requires a lot of persistence, luck and skill to win out and complete.  It is at least more than a glorified paint-job, but if you found the original games too frustrating, well, this one won't do a lot to change your mind. 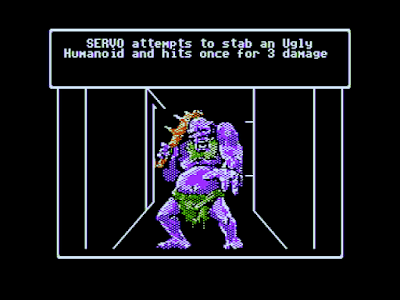