Wizardry IV: The Return of Werdna

Wizardry IV represented a departure for the series norm in many ways - rather than taking command of a player-generated party, you were now put in the shoes of the first game's villain, Werdna, as he made his way out of the tomb he was imprisoned in and attempted to regain his power.  Befitting this, Werdna starts out extremely weak, but as the player reaches magic circles on each floor, his level increases and he can summon groups of monsters to his aid.  The ludicrous difficulty of the previous games is taken even further here, with the player being required to have an intimate knowledge of the game's mechanics to succeed, only gain levels at preset checkpoints, and decipher a number of obscure, cryptic clues in order to get the best possible endings.  One example of this is the very first puzzle the player encounters - they cannot escape the first room unless they know to summon a monster that can cast the Light spell, wait for them to cast it, and then use that to see a hidden door in order to escape (this solution was also famously written down and sealed in an envelope in the game's box, with a note encouraging the player to only open it if absolutely stumped).  Moreover, the game is on a strict time limit, with the player constantly stalked by Werdna's nemesis as an immortal specter, and if caught at any point it's an immediate game over and restart.  An RPG that requires precise execution, encyclopedic knowledge and a ton of luck to win through, it's little surprise that it's considered to be the hardest RPG ever made, bar none.  If you're searching for a true challenge that will push your skill and patience to its limits, Wizardry IV was made just for you. 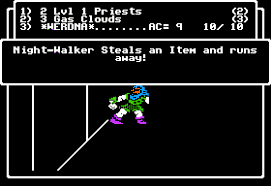