The Wizardry franchise is one that needs no introduction to any serious RPG fan; one of the first major D&D-inspired franchises on computer platforms, it was among the earliest to have a party-based format and color graphics and even implemented some relatively new features like Prestige classes (only accessible once certain levels are reached in basic ones).   In fact, it was so influential that it inspired the likes of other legendary titles like Dragon Quest and Final Fantasy, and even continues to get spinoff titles to this day in Japan (very few of which have been localized).  However, the first three games do suffer from a bit of poor planning- the original releases of 2 and 3 can only be played with a party created and imported from the previous game, resulting in each game selling less copies than the previous.  It may be rather primitive by modern standards, unreasonably difficult in many ways and have an unwieldy interface even on its newer ports (for the NES and numerous other platforms), but the original Wizardry trilogy is a piece of history that's at least worth a look for anyone developing interest in the genre. 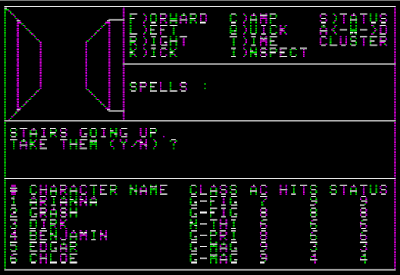