I really wasn't impressed with the first Witcher game; a general thirteen-year-old-trying-so-sound-tough maturity level and lackluster design overall took me out of it pretty quickly.  The third game in the series at least makes some significant improvements in this regard, adding considerable polish to the combat and attempting to give the player more to do with numerous side-quests (that don't all lead to cheap smut, surprisingly), an in-depth crafting system and banter that actually fells natural, as well as a less grating (though still very sex-heavy and profanity-laced) tone to the dialog on the whole.  It still hits all the same sour notes that turned me off to other modern RPGs like Mass Effect, though - overly simplistic and hand-holdy design despite describing itself as "open-world", all-too-frequent scenes of dull/inane exposition between characters you get zero context or buildup for beforehand and therefore have no reason to actually care about, endless tedious material farming, monotonous combat and buggy collision detection in general (getting my horse snagged on things was an all-too-common occurrence.  And since the game auto-saves with no opportunity to make manual ones, I was out of luck if that cost me a mission), and game design that requires no mental engagement whatsoever.  Quests consist almost entirely of wandering from one map marker to the next, there's never any decent puzzles and rarely any problem-solving more involved than "kill this scripted monster" or "push this button when prompted".  Not to mention it flatly spells out for you what choices will change the narrative later, which immediately ruins any feeling of gravitas; or at least, it would if it ever let you form an organic bond with any of the disposable cardboard-cutouts who milk every drop of pathos they can out of their one throwaway scene each in the name of CDPR's cheap social cred farm. Basically, the whole thing just feels cynical and manipulative, like they're covering up their barely-existent gameplay and sterile algorithm-generated design by forcing in as much superficial emotional weight as they can so they and their trained attack-dog fanboys can easily write off all criticism, related to it or not, as bigotry  thoughtcrime and give pen-for-hire fauxgressive gaming rags easy fuel for their glowing reviews, which only really serve to earn CDPR a tidy return on all that ad space they purchased by selling other peoples' much better games on GOG.  Witcher 3 is a graphically gorgeous title, but with such shallow, monotonous gameplay, an utterly boring length-for-the-sake-of-length narrative that puts no new spin on any of its already-ancient tropes, nearly all of the characterization and lore relegated to flat exposition in dry articles in an in-game wiki you have to bring the whole game to a dead stop to read, and an active contempt for the intelligence of its audience, it's not a particularly compelling journey to undertake.  If I want gameplay that consists of more than watching my character run from dot to dot for 150 hours and a story where the characterizations and storytelling come from a place of genuine passion and don't just feel like some overpaid committee of shysters trying to Pavlov any emotional response they want out of me, there's dozens of great examples. But to name just one: NieR.   Yoko Taro is also comfortable enough with his style that he can allow his settings, themes and characters to speak for themselves, and he doesn't have to stop every thirty seconds to beat you over the head yet again with how ADULT and MEANINGFUL and IMPORTANT his work is until you start doing it too just to make the abuse stop 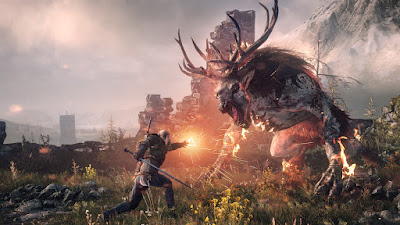