The Witcher is purportedly an "adult RPG", but like so many that apply that label to themselves, it mistakes constant T&A and shoehorned foul language for "adult content" and as a result becomes far more crass and juvenile than E or T-rated games of similar design.  There are too many examples of this to recount in a short review, but the most prominent one is that a major sidequest involves bedding every major female character in the game so you can get nudie pictures of them as trophies in the main menu.  Yeah.  It isn't a very fun game to play either, being a mostly-railroaded experience with endless sessions of boring follow-the-dot quests and mediocre combat that, while ostensibly based around timed button presses and dodges, is rendered trivial by the fact that you can simply mash the left mouse button and win every battle with ease whilst your character wiggles his sword over his head menacingly and still damages his enemies despite never actually swinging.  Sure, it also sells itself on having choices that actually matter (and which you don't actually see the consequences of until several hours after making them to prevent save-scumming), but when my intelligence is being constantly insulted by being served a version of Krondor that's ten times crasser and less than one-eleventh as engaging, I don't particularly care about that either.  Frankly, I think I (and most anyone else above the emotional faculty of a ten-year-old with a Playboy under his mattress, for that matter) have better reasons to play video games than to prove how much of a non-fag non-soyboy-cuck manly man I am to xXRapeCampSuperChamp69Xx on the GOG forums.  Like being entertained and, god forbid, maybe even challenged a little. 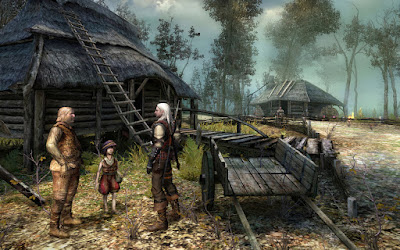