A remake of Wild Arms 1 for the Playstation 2, Alter Code: F is based in the Wild Arms 3 engine and shows it right from the get-go.  Many of that game's mechanics make themselves known right away - from the encounter cancel system (tied to a gauge refilled after battles), the Vitality bar that automatically restores HP after a battle, the lack of armor and accessories, and Arms being integrated into combat (firing with your normal attack, reloading with Defend) rather than a limited-use "special attack".  Most all of the dungeons are also redesigned to be more puzzle-oriented, and there are three new playable characters - all seen in the original game as NPCs.  It feels a bit low budget, lacking the polished animation and cel-shading of 3, but it's an interesting new take on a PS1 cult classic that's worth a look in its own right. 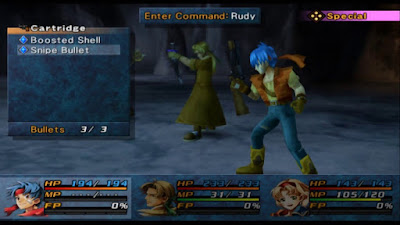