Yep, Hydlide continued into the 32-bit era, seeing release as one of the first Sega Saturn games.  Its also a product of the era, with graphics that are a mixture of dodgy CGI sprites, 3D polygons and performance-captured live actors.  The game is mostly a remake of the original right down to the silly plot, though they do attempt to remix things by having a randomly generated world - well, "random" in the sense that it takes a number of premade world pieces and shuffles them around each time you play.  I imagine this was a fairly impressive design element for the time, but I struggle to see anyone having fun with the game even then - the incredibly sluggish framerate and samey graphics that lend to disorientation, weird hit detection and random nature of everything lend themselves to constant frustration, and there's ultimately little point to exploring, making it feel less like a grand adventure and more like a sterile chore list.  In fact, the game actually preempts an oft-criticized element of many modern RPGs and always has an arrow pointing directly at your next objective, so it really is just a matter of running straight from one key location to the next and fighting bosses until you win.  So, if you want to try a somehow even clunkier version of Arena or Daggerfall on your Sega Saturn, give Virtual Hydlide a try; otherwise, skip it and play Shining Force III or Panzer Dragoon Saga instead. 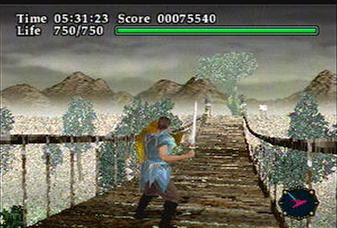