Vestaria Saga I: War of the Scions

Shouzou Kaga, understandably frustrated with Nintendo bringing legal action against him for creating a title nearly identical to the franchise he forged (Fire Emblem), took a ten-year hiatus before he dared to develop and release another game.  Vestaria Saga was another attempt to recapture his former glory, seeing a release as a free game in Japan (though the English version would carry a price tag of $20, allegedly to pay down the cost of development on the localization).  As you'd expect, Vestaria Saga very much resembles an older Fire Emblem game - visiting houses to get clues, money and items, fighting enemies, using the familiar Weapon Triangle and terrain bonuses to gain advantages in fights, limited-use weapons, and of course characters being able to permanently die in battle.  Being built in a retail game creation engine (SRPG Studio) does have some disadvantages, though - while the art is of good quality, it also looks distinctly stock, strongly resembling other prefab assets like RPG Maker's.  It's also irritatingly locked into a single tiny 4:3 resolution that cannot be changed, making it rather hard to play on a 4K monitor, and while XInput controllers are supported, it irritatingly does not recognize the D-pad on them without external tools like XInputPlus.  Fans of old-school Fire Emblem or Tear Ring will probably enjoy seeing Kaga back in the saddle again, but those attuned to the style of newer FE games will probably be better off going for one of those instead.  Or Dark Deity. 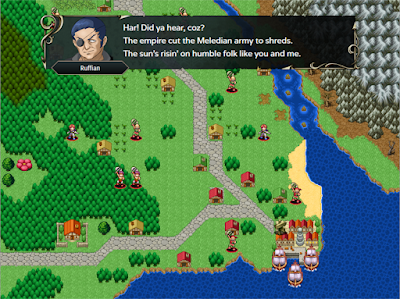