The final game released by Troika, a short-lived studio headed by a trio of developers who made their name with the original Fallout, Bloodlines is perhaps most emblematic of the studio's biggest problem - the talent they had was tremendous, but hampered by their severely restricted budget, development resources and a publisher who was actively out to screw them over.  Case in point, Bloodlines is stunningly well-produced in some respects, with very expressive character models, fluid animations and surprisingly good voiceover, but oddly low-level in others.  The game's engine (the earliest version of Source) feels very unpolished, with a small yet largely barren game world, numerous graphical bugs, generally weird physics and only a small number of NPCs with any meaningful interactions.  The dialog system works well for what it tries to implement, with skill checks for Intimidation, Seduction and the like becoming available as the player's skills increase, but other RPG elements are much more restricted; lockpicking and hacking are simple skill checks which you pass or fail depending on a flat stat number, which often leads to frustrating roadblocks in the course of completing quests, and unlike Deus Ex, there often aren't readily-available alternatives to complete any given objective.  The setting feels rather disjointed and hampered by the engine, with bizarrely-proportioned elements (a parking garage that's too small to allow cars to actually maneuver) and mention of it being set in modern day, yet having computers with capabilities and displays akin to an early-80s Apple II.  Combat in the game is functional but not particularly good, mostly just coming down to button-mashing and using the occasional buffer skill, with speedy attacks being far more effective than powerful ones, and stealth is just plain awkward and janky, making it an option I almost never used.  If you're looking for a dark, twisted storyline with some great atmosphere and choices that actually make substantial changes to the plot Bloodlines will certainly have you covered, but its underwhelming gameplay, constant bugginess and frequent crashing leave quite a bit to be desired, especially for fans of the Troika trio's earlier works.

(I would also strongly recommend getting the Unofficial Patch, which allows for higher resolutions,  restores cut content, patches many prominent bugs and balance issues, and even optionally adds new content). 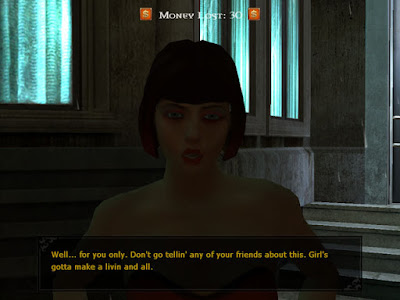