Underworld Ascendant got people buzzing at the time of its announcement, and it isn't hard to see why.  An officially licensed sequel to a cult classic DOS franchise (the Ultima Underworld spinoff series) from a company founded by Looking Glass and Irrational Games alumni and later joined by legendary developer Warren Spector; how could it go wrong?  Well, the answer turned out to be "releasing a very buggy, unfinished disaster with clumsy collision and physics, graphical bugs aplenty (with models often stretching into indecipherable masses of polygons) and a save system that puts the player back at the start of a level, regardless of their progress".  This, plus just generally feeling amateurish and poorly-optimized, with memory leakage, uneven framerates and frequent crashes emblematic of amateur-led Unity games, makes Underworld Ascendant a cautionary tale about the risks of crowdfunding and coasting on residual prestige.  There has since been a patch released to attempt to fix some of these problems, but as far as I'm concerned, it's too little, too late; if you want a good action-oriented dungeon crawl, you have plenty of better options than to wait for this one to maybe possibly reach the realm of "passable" one day.  Like the classic Ultima Underworld games whose legacy Ascendant irrevocably tarnishes. 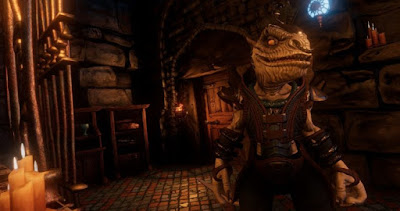