Uncharted Waters' second (and to date, last) outing in the west, and it's what you'd expect of a sequel to the first - still a very in-depth, numbers-heavy simulation with a lot of focus on trading and a touch of turn-based combat here and there.  It does have a bit more from a storytelling perspective, with six different characters to pick from who each have their own skill sets and goals - from finding the lost continent of Atlantis to finding a missing family member to clearing family debts.  Aside from that, the gameplay and UI are also quite a bit smoother, using Shining Force styled menu icons and having smoother movement and animation somewhat reminiscent of Dragon Quest.  The SNES version is also notable for having higher-quality music than most versions, and it fits the adventurous seafaring mood of the game well.  It's another slow-paced, micromanagement-heavy game that's only built for people with a strong interest in its particular niche, but it does what it does well. 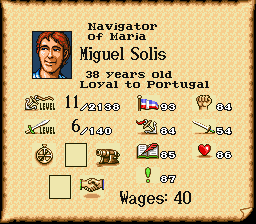