The fifth Wonder Boy game overall and the third in the Monster World subseries, and like its two predecessors, it's a side-scrolling open world platformer with some RPG elements, not unlike Zelda II on the NES.  This game also marked Monster World's debut on the Genesis, and as one would expect, it definitely takes advantage of the hardware with large sprites, popping colors and some fluid animation for Shion as well as his enemies.  Gameplay-wise it's quite similar to its predecessors - exploring a big 2D world, discovering secrets, battling the odd boss - but it adds a couple of twists.  Spells are now found and purchased, but are no longer limited-use items, and the various types of boots you collect give you advantages on different types of terrain, letting you climb, walk or jump higher, as well as granting special properties like faster swimming or being able to walk on ice without slipping.  Some annoyances do crop up, though, like unclear plot flags (I got stuck in the castle of Purapril until I figured out I had to talk to the first servant, then the princess, before leaving the screen.  One or the other doesn't cut it), or the puzzles with the Ocarina; there don't seem to be any clues to the songs you have to play, so you just have to puzzle them out through trial and error.  (And yes, ironically it was Wonder Boy, not Zelda, that made ocarina-playing into a major puzzle element first.)  Not quite as groundbreaking as Dragon's Trap nor as well-polished as Monster World IV, Wonder Boy in Monster World is nevertheless another adventure worth taking. 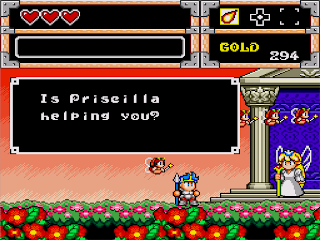