The fourth game in the Monster World series and the first to drop "Wonder Boy" from the title, as it stars a young girl named Asha this time around.  Monster World IV also returns to a stage-based layout a la Monster Land, though there is no time limit this time (and you can save mid-stage to ensure you don't miss anything before moving on).  Asha is a considerably more mobile protagonist than most in the series, as she can dash, perform upward and downward stabs to hit awkwardly-placed enemies, press down to manually block with her shield, and shimmy up and down ropes.  A couple stages in she also gains an ally in the form of "Pepelogoo", a small flying critter whom she can use to glide, press distant switches or hop from in mid-air to reach platforms she normally couldn't.  As per series standards, Monster World IV is still a visual delight, with expressive character graphics, detailed backgrounds and some nice parallax scrolling effects, and a sense of humor that's pretty spot-on throughout.  A pretty overlooked game in its day (only seeing release in Japan until the digital distribution became big years later), but it was a strong note for Monster World to go out on nonetheless. 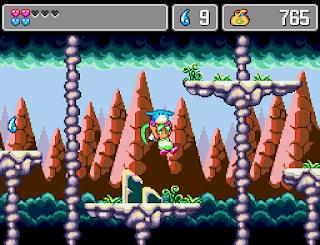