Beginning life as an arcade title before being ported to numerous home platforms, the second Wonder Boy game (and first in the Monster World subseries) was a relatively novel blend of elements.  You'd hop through platforming-based stages in a style similar to Mario (complete with a constantly-ticking timer, though you can collect hourglasses to extend it) and earn gold from defeated foes, which you could then spend at shops on a variety of upgrades - better armor, shields to block projectiles, shoes that boost your run speed and jump height, and limited-use spells to attack enemies beyond the range of your sword.  Limited time powerups exist too, such as temporary invincibility, gliding or doubling your strength for a short period.  Sounds fun, but the difficulty it presents errs on the side of "absurd" - your sword has an exceptionally short reach and your stiff movement and relatively large hitbox make it difficult to hit many enemies without being hit yourself.  Not to mention the fact that there's no lives system - running out of health starts the game from the beginning, regardless of how much progress you'd made.  If you fancy yourself a master of platforming games it's one you may want to check out, but I personally think it's one of the weakest Wonder Boy games. 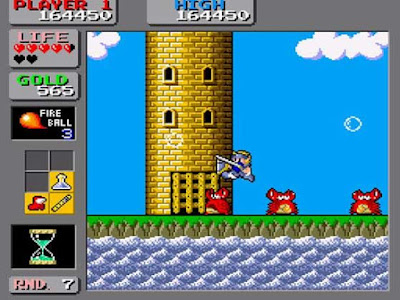