Not to be confused with the similarly-titled but very different gameplay-wise "Wonder Boy III: Monster Lair", Dragon's Trap picks up right where the previous game concluded - in fact, you start out by playing a simplified version of that game's final dungeon and even defeat the boss again as your first challenge, eight years before Symphony of the Night!  Like SotN, though, things quickly diverge as Book (the hero) ends up cursed and turned into a lizard man, complete with the ability to breathe fire.  After this the game opens up and becomes a nonlinear adventure, having you travel around the land, defeating various other dragons in an attempt to become human again - and in the process, being changed into several other animal forms, all of which have differing abilities you'll need to access new areas.  For example, the Mouse-man form can cling to special blocks and fit through small passageways, while the Piranha-Man can swim underwater and Hawk-Man can fly, but takes damage if he touches water.  It's a much more forgiving game than its predecessor(s), has a lot more variety, and you can even save your progress via a password system and come back later.  A great game for its time with some inventive gameplay and quite nice graphics, as well as arguably one of Sega's first real contenders to giant titles on the NES like Legend of Zelda and Metroid. 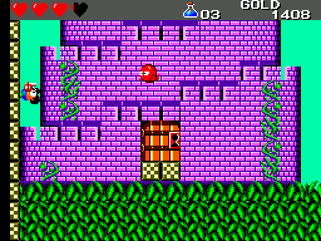