The Super Nintendo and the Sega Genesis were heated competitors in their day, though each provided a very distinct gaming experience; both systems had very different technical capabilities and several examples of getting much different games based on the same license.  Shadowrun is certainly one of those cases - while both platforms' Shadowruns are loosely based on the tabletop game of the game name, the SNES version went for a plot-driven experience with more fast paced gameplay and worked in some elements of a point-and-click adventure game.  The Genesis version, on the other hand, took the opposite approach, putting much heavier focus on the role-playing aspect.  You spend a very large portion of the Genesis game doing randomized quests - usually in the form of delivering packages, recovering a stolen package from a building (eliminating any resistance in your path), clearing out hordes of ghouls or hacking into systems with your cyberware.  Doing jobs earns you money and Karma, which you in turn reinvest into purchasing new equipment, recruiting ally shadowrunners to aid you and upgrading your stats.  Which all sounds fun on paper, and is for the first few runs, but the repetitious and generally barren layout of the game ensures that it doesn't stay that way for long.  Moreso because it's hard to make much leeway at all without doing a copious amount of grinding; without some high-grade armor and an absolutely maxed out Speed and Intelligence stat combat is extremely difficult to survive, as your character will be stuck in place for an absurdly long time after firing each shot and will not be able to outrun enemies who can quickly beat you to death.  I found melee attacks to be very cumbersome too, as you still need to futz around with the lock-on to hit your enemies; of course, they have no trouble with this as they always outnumber you and hit you with pinpoint precision every time they swing, quickly pummeling you to death if you're foolish enough to fight them in close quarters.  In addition to that, the game fits the mold of many CRPGs of the era, making no attempt to balance encounters to your level and rarely even giving you any warning you may not be able to handle things yet, which can result in a lot of cheap deaths and resets.  Random events also occur as you travel around - some good ways to earn money or purchase items on the cheap, but others are quite irritating, like having to fight hostiles after walking into an inn (no good thing if you're low on health and trying to top yourself off).  Shadowrun on Genesis has a good story to tell, some stylish graphics and open-ended CRPG-style gameplay that's relatively ambitious for a '90s console and even fun to a point, but because of general poor balance, grind-heavy design and underwhelming combat, only to a point. 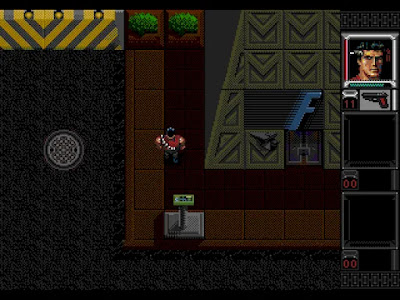