A relatively late-era Sega Genesis action-RPG, Light Crusader also proved to be the only RPG outing from fan-favorite developer Treasure on any platform.  But does it prove to be a worthy attempt at the genre, or is this regarded as one of Treasure's lesser games for good reason? 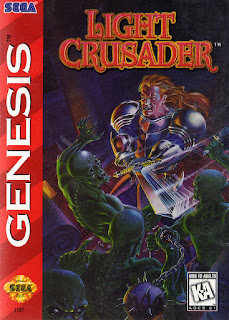 Treasure was a company comprised of former Konami alumni who were bored of making endless sequels, so they set out on their own to create a company that could consistently produce new ideas.  That, as well as their enthusiastically weird art and smooth gameplay, quickly earned them a dedicated fan following, and they would go on to produce fan-favorite action games like Gunstar Heroes, Alien Soldier, Radiant Silvergun, Mischief Makers, Ikaruga and Bangai-o over the course of their career. Puzzle-driven action RPGs are a genre far removed from their wheelhouse, but for their first (and to date, last) foray into the genre, they did a surprisingly good job.

The art style of Light Crusader definitely doesn't fit Treasure's mold; rather than using their usual heavily-stylized anime character designs, Light Crusader opts for a more homogenized dark fantasy look with isometric graphics, not unlike something you'd see on the PC platform around that time. Some subtle nods to their usual style still exist, though, mostly in the form of artwork hanging on the walls in towns and some of the stranger boss designs, such as the giant sponge boss. Still, even with the change in style Treasure's trademark smooth animation and penchant for flair remains - Sir David's movements are fluid and expressive and even NPCs get some surprisingly funny and exaggerated animations at times.  The game uses creatures comprised of multiple separate sprites for smoother animation despite their large size, and even uses some polygonal elements for spell effects and opening doors while rarely suffering any noticeable slowdown.  One also can view a minimap at any time from the pause screen, keeping the action fast-paced and minimizing unnecessary backtracking.  Even enemies get some pretty hilarious frames when you defeat them, being cut in half at the waist or decapitated (with their head bouncing on the ground); there's no blood owing to the KA rating, but it's still quite amusing to see.

Treasure certainly didn't ever skimp on audio design either, and Light Crusader is no exception.  All of the game's music is atmospheric and surprisingly immersive, and they work in some digitized voices at times too - usually in the form of instructions for how to clear a particular room ("Beat them!" or "Solve the riddle!" ), or as the bluntest low-health warning I've ever heard ("It's gonna kill you!").

Light Crusader controls well too, with smooth, responsive controls and fluid movement that puts other isometric games on the platform to shame.  This is also aided by objects and your character having shadows beneath them so you can easily gauge where they are in 3D space, so the platforming and fighting aerial foes is fun rather than arduous.   That said, it's not flawless - hit detection is still slightly weird at times, and it can be tricky to hit some foes without being hit yourself simply because it's difficult to gauge distance between you and them.  Even the game seems to be aware of this, as health-restoring food powerups are quite common, and there's even an option to use them automatically when you take damage (but as this tends to activate and waste your high-end items every time you take a scratch, I quickly turned it off).

One relatively unique element in the game is its magic system.  Rather than running off an MP meter, you purchase them in shops or find them as random drops from enemies.   They come in the form of single-use items fitting the four Greek elements (fire, water, wind, earth), and while each can be used on their own, you can also combine them together a la Gunstar Heroes to create new effects.  For example, Fire + Earth creates a powerful rebounding meteor, while Wind+Water creates an ice blast that temporarily immobilizes enemies on a hit.  Combinations of three (Wind+Earth+Water=Turn Undead) or even all four (Judgment - powerful non-elemental damage) are also possible, so there's a lot of combinations to experiment with. One should still try to use them sparingly, though, as drops for them are relatively uncommon and they are rather spendy in shops.
So, for a game I was reluctant to play for so long, and one that's regarded as Treasure's worst game on the Genesis, I found myself having quite a lot of fun with Light Crusader; it's slightly janky but surprisingly fun once you adapt to its quirks.  (Also, Treasure's worst on the platform rightfully goes to "McDonald's Treasure Land Adventure", which is still a decent game).  It also stands as proof that even when Treasure steps out of their comfort zone, they still bring the same high quality and focus on smooth action they do to all of their games.  A solid and surprisingly entertaining effort that, while maybe not one of the best on the platform, is definitely worthy of a play; especially since it's still available for relatively cheap even in cartridge form. 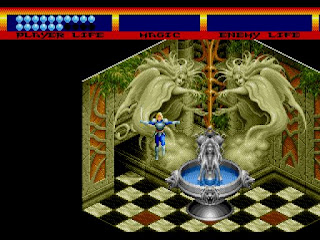 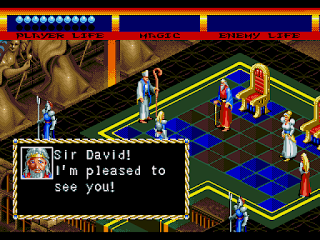