The original Ultima Underworld was a groundbreaking and strongly acclaimed game whose influence is still felt in games today, and it's sequel does its best to carry on that legacy despite a crunch-heavy development cycle.  The concept is a solid one - the Avatar discovers a way to enter various worlds the Guardian has already conquered, attempting to discreetly stir rebellion against him and ultimately undo a powerful spell that has Britannia under siege.  To that end, you travel to numerous distinct locations - some familiar, some very alien (the mechanical world of Talorus being a particularly bizarre one) and witness firsthand the twisted machinations of the Guardian.  The original game had one large dungeon with eight labyrinthine floors, so having more variety is a nice change of pace, even if these new worlds are usually much smaller in scale (Mostly between 2-5 floors, and not nearly as densely designed). The downside to this is that Ultima Underworld II's progression is considerably more linear than the first - while you do occasionally have to revisit worlds to complete tasks started in others, each world is for the most part a self-contained story that you see nearly all of your first time through. The same skill system and stats return from the first too, with surprisingly few changes save for a handful of new spells to cast (and some older redundant ones removed).  Unfortunately, this also means that most of the skills that were largely useless the first time around still are - some even moreso with the advent of spells like Open (which completely removes the need for the Picklock skill) and Mending (ditto for Repair).  It doesn't break much new ground in terms of design, but UU2's brilliant writing, creative puzzles and challenging-but-never-unfair gameplay still shine through, creating another memorable adventure that's well worth undertaking. 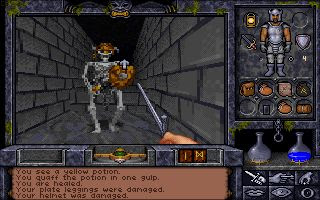