Runes of Virtue wasn't a particularly popular game even in its time, but being portable lent it a certain appeal; even if Game Boy/Game Gear games weren't so good, you could at least play them without being tethered to a TV.  So of course it sold well enough to warrant a sequel, released two years later on the Game Boy and with a SNES version following a year after that.  The SNES version had much-improved graphics and sound design (no surprise owing to the much stronger hardware) but was pretty much identical to its portable counterpart in terms of gameplay.  It is a marginally more polished experience than the first with larger, fully-detailed towns, more items and NPCs to interact with, something resembling an overarching plot (albeit a simple and silly one) and substantially refined gameplay, with tighter movement and collision detection in general.  Still, this game ended up looking pretty dated by 1993, particularly as the Game Boy had an amazing Zelda title released the same year (Link's Awakening), to say nothing of Link to the Past on SNES and two of the best Ultima games of all time on the PC in Ultima VII and Serpent Isle.  Mediocre compared to its contemporaries, but it's short enough to not wear out its welcome and even has some clever nods to the series proper that I like, so it's one I didn't mind playing through once (but only once).  Oh, and I recommend you play the SNES version - it looks and sounds much better and is generally less stiff, buggy and frustrating.  It's also a quarter the asking price  of the Game Boy version nowadays, which certainly doesn't hurt its case. 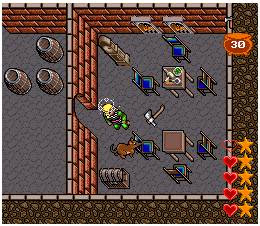