A year after Ultima II, the third game was released, upping the ante even further for both the series and the genre.  Featuring animated player sprites (a rarity at the time) and a party system that allowed up to four characters to venture across the land together at once, Exodus upped the stakes in other ways too.  One can now interact with the world and characters in surprisingly clever ways - bribing guards to leave their posts, pickpocketing people to earn extra money, and buying horses to traverse the landscape quicker, avoiding enemies and consuming less food as one travels just to name a few.  As per the previous game, there are plenty of secrets to find, but grinding experience and cash is still a big part of the experience - leveling up boosts one's maximum HP, while finding money is required to purchase equipment and food.  Dungeons are required once again, containing important clues as well as four "Marks" which grant the player new abilities necessary to finish the game.  There is a lot to do in Ultima III, and it all feels well-integrated and significantly less grindy than the second, making this a simple but enjoyable early CRPG adventure. 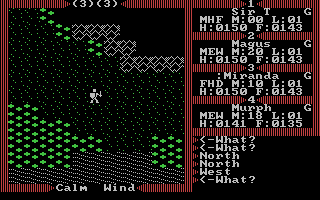