Ultima II: The Revenge of the Enchantress

Ultima's second entry takes the weirdness of the first even further, largely taking place on an Earth overrun by evil monsters and letting the player travel between several time periods, each with their own world map layout and secrets to find.  Once one finds a spaceship, they can even explore nine other planets within the solar system (the tenth being "Planet X"), each of which has some unique and strange sights of their own.  However, nearly all of this side content - and indeed, every dungeon in the game - is completely optional, with only a small handful of areas actually being required to visit for game completion.  Much of the game's focus is on bare grinding - defeating particular types of enemies to earn experience, which in turn causes stronger enemies to spawn.  Defeating certain types will drop items, allowing the player to breach new boundaries (for example, one requires a Blue Tassel to sail a pirate ship, which requires defeating pirates in battle.  Pirates and ships only begin to spawn at level 5 or higher).  One must also grind a lot of cash to purchase equipment, items and food, as well as visit the Hotel California and pay money to raise their stats.  This, paired with the minimal plot, makes this feel much closer to a utilitarian monster bash-fest than any other Ultima game in the series.  It's still worth a look for the oddness of its setting and design, but not an Ultima game I revisit very often. 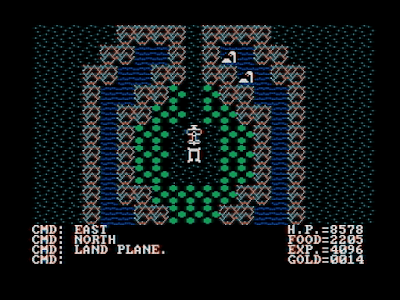