How do you take a sprawling, expansive and massively interactive open world game like Ultima VII and port it to a console?  Well, you can't, really; you'd either need to invest in a massive amount of ROM space for your cartridges (which would probably be passed on to customers, resulting in low sales) or you need to basically make an entirely new game that only faintly resembles the original.  The Black Gate is a case of the latter, reimagining the experience as a top-down dungeon crawler slightly reminiscent of the Zelda titles.  The problem, though, is that it lacks any of the polish that make both Zelda and Ultima such brilliant franchises; dungeons are extremely samey and tedious, movement is stiff, hit detection is shoddy, and combat is nothing short of a chore.  As there is no post-hit invincibility period, even a lowly rat can drain your health in the blink of an eye and kill you, to say nothing of giants and orcs.  The plot has been trimmed down to bare basics, there are no other party members to recruit or play as, and, owing to Nintendo's content policies of the time, violent and sexual content is scrubbed; enemies simply vanish when killed, and the murders that drove the plot are changed to "kidnappings".  The world design doesn't have any logical sense to it, either - you can easily step into an innocuous basement in a village and meet gremlins who drop exploding powder kegs at your feet, killing you instantly. Basically, it's a mostly linear action game with only light RPG elements now, and not even a remotely good one, especially when compared to Link to the Past or the Quintet offerings on the same platform.  A complete desecration of an immortal classic that's only worth a look as a morbid curiosity. 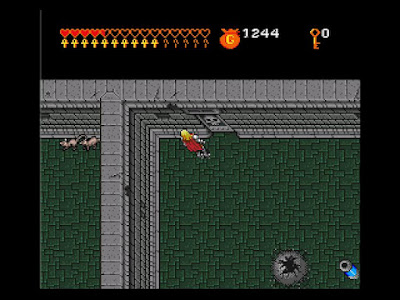