An extremely rare title released exclusively on the VIC-20 computer system in its twilight days.  Despite the name, though, it doesn't resemble Ultima whatsoever in terms of design, instead being more of a simple dungeon crawler - each floor gives you 99 seconds to navigate a simple 8x8 maze and reach the end.  Combat is a strange affair, putting the player in a side-view and having them position their character and try to hit a specific point on the enemy's body with a timed button press before they approach too closely and take one of their few "lives".  The problem, though, is that the game isn't particularly fun; the mazes get very samey after a while, and though the combat seems simple, landing hits is irritatingly precise, making getting through the game a source of extremely tedious trial-and-error and luck rather than a test of skill.  Because of this, as well as being released in the late days of the VIC-20, the game is extremely rare, with copies now selling for tens of thousands of dollars. A complete copy of the tape has never been made available online to deter counterfeiting, making it difficult to even emulate.  It may be worth trying out the fan remake for PC platforms briefly as an odd curiosity, but if you've got the money to burn, I can safely say that this one simply is not worth the asking price. 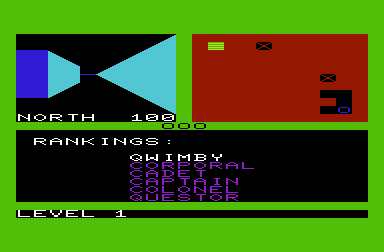