A game that draws heavy inspiration from old-school Dungeons and Dragons and the Wizardry series, which was a common thing in the early days of computer gaming but a relatively rare sight for the Nintendo DS (about the closest thing to mainstream success the first person dungeon crawler genre saw there was the Etrian Odyssey series, and even that remains pretty niche).  Dark Spire certainly sets itself apart in some ways, though, with an eye-catching visual style blending shadows, expressive character art and vivid flat colors, creating an aesthetic somewhat reminiscent of an old comic book (though you do also have the option to utilize a more minimal style directly inspired by Wizardry).  You're also at least afforded a tutorial to explain the basic mechanics to you, and the game has a pretty sharp sense of humor throughout, but other than that, this is very much an old-school RPG - pick your classes and races, slowly make your way through a huge labyrinth, and be prepared to be beaten up by monsters and killed by traps every step of the way.  Even the game's developers were very aware of this, recommending that you make your own maps on graph paper to keep track of where everything is (particularly as the in-game mapping system is very minimal and somewhat inconvenient to use).  It's become relatively rare and expensive nowadays, but if you have the itch for an old-school punishing dungeon dive and you can spare the expense, it's one you may wish to check out. 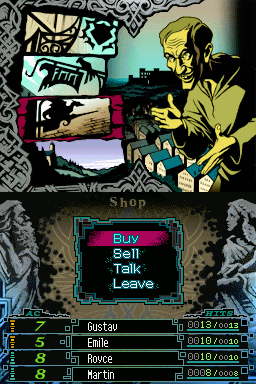