Destiny of an Emperor

The Three Kingdoms period of Chinese History is one that's ripe for adaptations, and there have been tons of them in the realm of gaming (probably the best-known of which are Koei's Warriors and Romance of the Three Kingdoms franchises).  Capcom took their own crack at it (and their first foray into RPGs) with an adaptation of the manga "Tenchi wo Kurau".  Not a turn-based strategy game as you'd expect, though - a traditional Japanese RPG with a few terms switched around.  Hit Points are your soldiers, Tactics are your spells, and there are 150 recruitable characters to serve as your generals in battle, act as a reserve force should one of your generals fall, or become your tactician and provide your whole team with various Tactics to utilize; unlike most RPGs though, most characters' stats are fixed and don't improve with levels.  Battles tend to go on for quite a while, but fortunately there is a handy function in the "All-Out" command that causes both sides to continually attack one another and skip all prompts and dialog boxes until one side falls (Handy for quickly mopping up weaker forces - not so much when you're facing any considerable threat).  Destiny of an Emperor is not the most talked-about NES RPG, but it does have a dedicated following, with fans creating their own editing tools and scenarios to keep players coming back for more.  Worth a look! 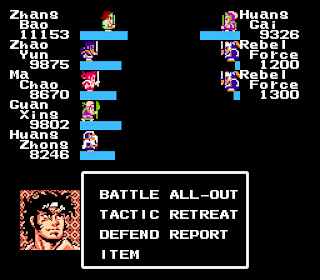