Arkane Studios is a name I associate with ambitious but not entirely successful concepts, and Dark Messiah of Might and Magic is one that actually came out surprisingly well.  Contrary to every prior Might and Magic game, it puts much less emphasis on character building, exploration and role playing and focuses much more on action, utilizing the Source engine's physics capabilities as a central element.  This makes combat a lot more interesting than most action-RPGs, as it's much more than simply hitting them with sword, arrow or magic until they fall down - you can knock down shelves to crush enemies, pick up and throw barrels, set up ice and oil slicks to send them flipping, kick them into spikes or fires (which are conspicuously placed in almost every combat zone), get them in the path of a swinging chandelier to kill them, and even smash up floors and walls as you fight, sending enemies (and possibly yourself) plummeting.  In fact, your character isn't particularly durable, so facing enemies head-on is usually a bad plan - you're much often better served knocking them down and then finishing them while they're helpless, or throwing objects from afar or setting traps instead.  This all sounds awesome on paper, but without some tweaking, you won't get the most out of it.  Your character's constant head-bobbing is extremely distracting and the touchy mouse sensitivity makes aiming attacks surprisingly difficult, and it crashes quite frequently on modern systems without some modification.  Things that look like they would be immediately fatal (knocking an enemy off a ledge and watching them drop over twenty feet) often aren't, while a well-placed hit with a barrel or small crate often are.  Even the cutscenes (both prerendered and in-engine) seem to poke fun at the focus on physics, with characters having wildly exaggerated motions and knocking things over constantly.  It doesn't entirely succeed at what it tries to do (any part that requires precise platforming or climbing up ropes is generally a nightmare to deal with), but the short runtime and surprisingly entertaining twist on the generally-dull fantasy RPG combat makes it worth a look.  So if you want something that has the look of Oblivion but action more in line with a Tom and Jerry cartoon, give DMMM a try. 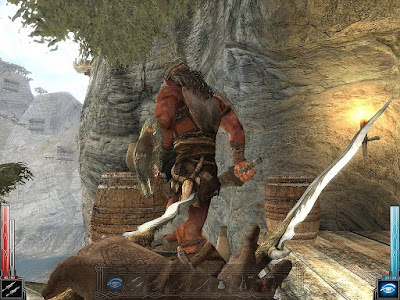