Dark Deity makes no secret of its inspirations, with even its Kickstarter campaign page admitting that it's directly inspired by Fire Emblem and strives to copy its gameplay and aesthetics.  But as I've said on many occasions, a blatant copycat is no bad thing so long as it's well-made. Dark Deity mimics its inspirations surprisingly well, with fluidly animated combat sprites, a complex and well-written narrative (even retaining Fire Emblem's signature one-on-one character interactions) and grid-based combat that emphasizes individual skills and carefully moving your units ahead as a group so that enemies don't single out characters and pick them off.  It does diverge in a few ways, though - weapons don't wear down with use and characters wield four apiece throughout the whole game, each emphasizing different stats and enemy weaknesses, and all can be upgraded with tokens earned in battle.  The "weapon triangle" is a bit more complex, factoring in not just what weapon types both characters are using, but the armor they wear as well.  Permadeath isn't in the game, but a character who falls in battle will suffer a permanent penalty to one of their stats, letting the player decide whether it's worth it to keep going with the penalty or restart the battle to try again.  It does suffer from a few annoying technical issues, with prominent lag in some menus and scene changes and switching over to mouse/keyboard control if you so much as move your cursor slightly on the PC version, not always swapping back when you press a button on a gamepad.  But even with a few hiccups, Dark Deity is a very solid effort that fans of tactical RPGs with a focus on characters and storytelling should enjoy. 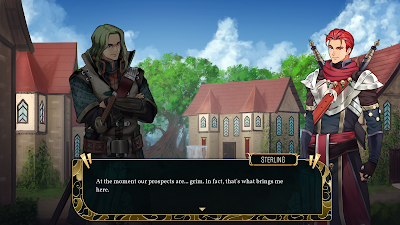 Developer: Sword and Axe LLC
Publisher: Freedom Games
Released: 2021
Platforms: PC.  Ports are also planned for Switch, Xbox and Playstation, though they have not been released yet as of this writing.
Labels: ⭐⭐½, 2021, Quickie Reviews
Newer Post Older Post Home