Crypt of the NecroDancer

There are quite a few roguelikes out there, especially now that the indie scene has become such a prominent sight in gaming.  Crypt of the NecroDancer attempts to put its own twist on things, though, by having everything synced to music - "turns" are all carried out to the beat of the backing track, with the player also required to time their actions to the beat, getting a bonus multiplier the longer they go without missing a beat and without getting hit.  Enemies all move and act in predictable patterns, so learning and memorizing them is key to success, as it using the numerous weapons, items and spells you pick up along the way.  Between deaths you can also purchase upgrades for your next run - health, weapons, armor and even bonuses like more chests or starting with a higher coin multiplier.  It takes a bit of work to adapt to, but for fans of roguelikes, Crypt of the NecroDancer has a very fun and inventive bent. 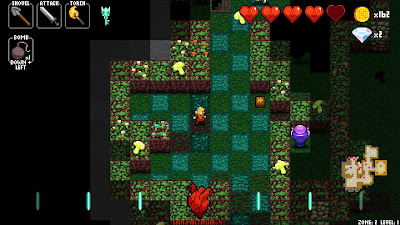