Grasshopper is a bit of a low-key cult company, known for making bizarre, heavily stylized and often extremely violent games like Killer7, No More Heroes and Killer Is Dead.  Contact was their attempt at an RPG, though more kid-friendly than their norm owing to the younger target audience of the Nintendo DS.  Grasshopper's quirkiness still shines through though, evident right away with the dichotomy of art styles on the two screens - the two main characters (Terry and the Professor) live in two very different worlds, with Terry occupying a more photorealistic environment while the Professor and his ship look more akin to a 16-bit game (and quite a bit like Earthbound).  The gameplay is also notable for working in elements of games that would become popular in subsequent years; the player has direct control over Terry's movement, equipment and skills, but he auto-attacks on his own slightly akin to the Xenoblade games.  There's a cooking system in the game that allows you to not only recover health, but temporarily bolster your stats (a la games like Elder Scrolls and Breath of the Wild), and while you do get the full benefit right away, you can't just scarf down a ton of food and put yourself back to full whenever you're in trouble - you actually have to take varying degrees of time to digest it, which can leave you in a tight spot during a tough boss battle.  Unusally for a Japanese RPG, one can also attack almost any NPC in the game, potentially accruing negative Karma and causing townspeople to attack you a la some old CRPGs (though there is no real benefit to doing so as far as I can tell).  There are also no preset 'experience levels', instead falling back on a system similar to Final Fantasy II or the Elder Scrolls games - your stats gradually improving as you do things that tie to them.  Taking damage boosts your HP, attacking boosts strength and weapon proficiency, running around boosts your agility, being hit by elemental attacks raises your resistance to them, cooking boosts that skill, and so forth.  Once weapon skills reach certain plateaus, you learn new techniques to use, governed by points that gradually recharge as you defeat enemies in battle.  One can also equip outfits and "decals" to bolster certain stats, which adds a bit of depth (especially as you can't reuse the latter once you remove them).  While not an amazingly deep game and you do frequently end up having to stop for a while and grind so you don't get crushed in the next area, the game's quirky sense of humor, unconventional design and the general off-beat mood throughout have earned it a dedicated fanbase.  If you can find a copy, give Contact a try. 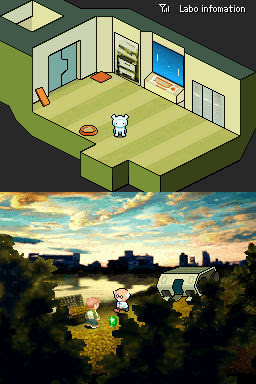