An RPG that showed a lot of promise on its face, combining a tragic fairytale with a storybook-like presentation, a beautiful and sad soundtrack, and gameplay that combined elements of Grandia and Paper Mario together.  It works to a degree, with the player able to delay enemy turns and cancel them with well-placed attacks and enemies able to do the same, and a pretty varied party with a number of unique skills.  Sadly, it all just gets a bit tiresome before long, as enemy battles tend to get exceptionally drawn-out and repetitious since it's all basically built around that one gimmick with no real variation (well, aside from enemies that punish you with heavy-damage attacks for cancelling their turns, defeating the entire point of having such a system).  This, plus the large amount of grinding required to defeat some bosses and craft spellstones, as well as the fact that the game relies so heavily on random dice rolls (with the odds tilted out of your favor at every turn), made this a game I got bored of well before the end. 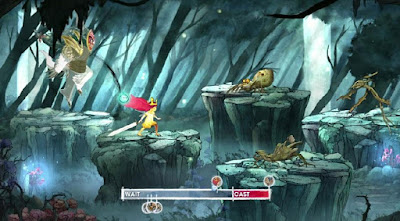