The third and last Castlevania game developed for the Nintendo DS, and the last of the "Metroidvania" styled ones, though it definitely takes on a more action-oriented bent than its predecessors. Combat is now much more fast-paced and intense and bears more of a resemblance to the Contra series, all but requiring the player to collect specific glyphs (equivalent to Aria/Dawn of Sorrow's Souls) to strike at bosses, and even with armor upgrades they die in only a few hits even to mundane enemies, requiring near-perfect mastery of pattern memorization to succeed. Which might have been tolerable if this were on a console, but is not exactly a good thing when one considers the poor-quality D-pads on most Nintendo DS models. It's a game I wanted to like, but I ultimately just found it too frustrating to play, and I still point to it as an example of why this type of game isn't cut out for handheld systems - twitch-input action games that require precisely-timed actions and movement should best be left to platforms with bigger screens, sharper framerates and higher-quality controllers cut out for this type of thing. 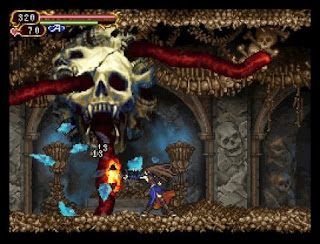