After a decade at Intelligent Systems making the Fire Emblem series on the Famicom and Super Famicom, Shouzou Kaga founded an independent studio and continued to make pretty much the same style of game, just under a different title.  Nintendo wasn't too happy about this, suing his company and publisher for copyright infringement and ultimately winning a 76 million yen judgment on appeal.  It's easy to see why after playing it, too, as Tear Ring is pretty much old-school Fire Emblem down to the last detail, with the same style of animations, a nearly identical UI, the same degrading equipment and permadeath, and a heavy focus on character interaction and dialog (and visiting houses and shops mid-battle to resupply); the only major difference is some solid 32-bit 2D graphics and quality CD music by an ensemble cast.  This one is worth a look for die-hard Shouzou Kaga fans as an unofficial sequel of sorts to the 16-bit era FE games. 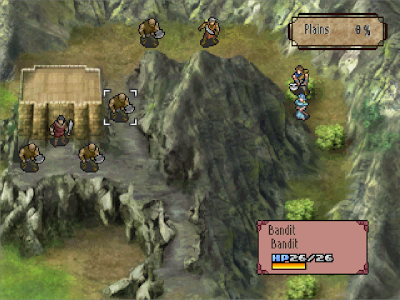