The third game in the Hydlide series and the second to be localized for a western audience, this time as an early release for the Sega Genesis.  A few improvements are evident right away - you have a choice of multiple classes, as well as an attack button, so combat isn't just a game of madly dashing into enemies and hoping for the best.  However, the game also unwisely attempts to add in a lot of CRPG elements - you have to manage your carry weight (carrying too much will slow you down dramatically or even make you immobile), hunger, tiredness (stay awake too long and you die) and even Morality - attacking "good" monsters will cause more traps to appear, while avoiding doing so will earn you extra rewards.  It also goes into a rather surreal place, having you travel the stars and even wander through space at one point, so it's got quite a bit of that early CRPG imagination to it too.  It's still very easy to die - both you and your enemies register numerous hits per second and venturing even a screen too far can result in you getting reamed by much stronger foes - so you have to be absolutely on-point with your movement and attacks and diligently manage your character if you want to get far.  Basically, it's Hydlide with a few improvements, but also a lot of new annoyances attached that, while at home in CRPGs of the time, feel rather forced in a game built around fast paced action.  Still, its creative elements and just being a substantially better game than its predecessor (while not quite escaping its annoying trappings) make it at least worth a brief look. 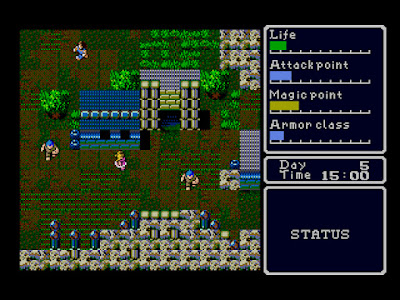