The original Tear Ring game copycatted Fire Emblem to a T, which caused a legal tiff with Nintendo; likely in response to that, its sequel retains the basic gameplay, but goes out of its way to distinguish itself in every way it can otherwise.  The UI is now substantially different, bearing slightly more of a resemblance to Final Fantasy Tactics with its static portraits and dialog windows.  The game now utilizes an isometric perspective, with action taking place on a hex grid rather than square tiles, and the side-view attack animations are typically reserved for moments of emphasis.  Weapons no longer have a fixed number of uses, but  a small chance to break each time you use them instead, and each weapon type now has a separate skill level per character associated with it.  In addition, most units aren't loyal to you by default; you have to pay them at the start of each battle to have them fight alongside you, but taking certain actions (to raise a hidden Happiness stat) may cause them to join you proper.  It even goes so far as to exclude Kaga's name from the credits as a means to appease Nintendo, though it's clear from his blog posts that he was still very much involved in developing the game.  The end result feels substantially different from its parent franchise, but still similar enough to satisfy die-hard Fire Emblem fans and strategy buffs alike. 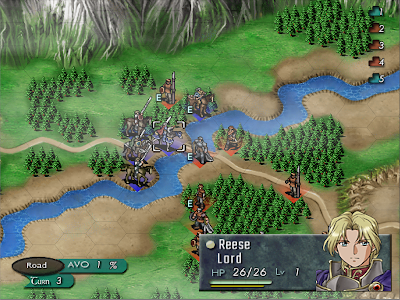