Xanadu isn't a particularly well-known name among RPG fans; at least, not in the west. It was the second game in the Dragon Slayer series and one of the founders of the action-RPG subgenre, inspiring games like Zelda and Ys. Only a few of its games have been localized (the best known being two cult NES games - Legacy of the Wizard and Faxanadu) but Tokyo Xanadu is the latest turn for the series, and an odd one at that.  Indeed, Falcom seems to have seen the success of the Persona franchise and taken a crack at making their own version, which is particularly evident in its focus on life-sim elements; between dungeons, you have the ability to complete sidequests, interact with characters to build relationships, and bolster your own personality traits to do more of the same.  These scenes do tend to be very long and dialog-heavy, however, which hampers the pacing if you're comparing to Persona.  By contrast, the dungeon element seems to be over with much too quickly.  Much simpler, too, as the game opts for a basic hack-and-slash format not unlike the Ys games - dodge, attack, jump-attack and ranged attack enemies, getting bonuses for winning battles quickly, keeping combo chains going and striking elemental weaknesses.  Defeating foes earns components that can be crafted into weapon and armor upgrades, and between missions one can also cook to create new items.  It all sounds good on paper, but the dragging pace, overly simple action and inane dialog overall ensures that it fails to strike that all-important balance and actually become fun. 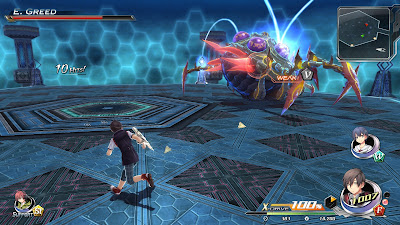