An early Sega-produced RPG on the Genesis, which was heavily promoted on how much more advanced it was than similar games in the NES, bragging about its 5 Mb ROM size (the largest NES games had a maximum of 4), showing off its large, detailed sprites and boasting about having "Over 300 hours of gameplay".  Well, that last point is very obvious hyperbole (in fact, even a tenth of that is still a stretch), but Sword of Vermilion is at least a relatively unique combination of elements spanning numerous RPG subgenres.  Towns are viewed top-down and with a graphical style (and UI) remarkably similar to Phantasy Star III, outdoors and dungeons are seen in a first-person view a la Might and Magic (with unlockable minimaps!), and combat comes in two flavors.  Normal encounters are done in a top-down style, with the player able to fire spells with one button and swing their weapon with the other, and touching an enemy while swinging will cause them to take damage, but they will also damage you on contact; not dissimilar to the Ys games.  Finally, boss battles are seen from a side-view, with the player having to close in and attack with their weapon, then deflect or avoid the bosses' attacks before they land.  It is quite drawn-out and grindy per games of the era, with a lot of money farming and frequent random encounters, but combat does at least move pretty fast compared to most other RPGs of the time.  In addition, the music is catchy and the visuals quite good, with lots of large, detailed sprites and some downright awesome monster designs.  It's not one of the best RPGs on the Genesis by any means, but its uniqueness, strong presentation and being produced by Sega superstar Yu Suzuki make it worth a glance for fans. 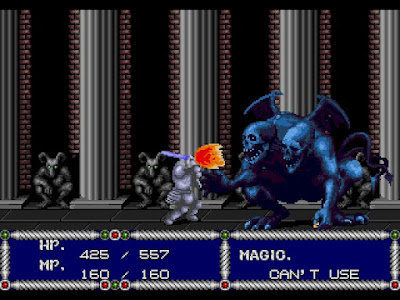