Daikatana on PC is a name which continues to live in infamy.  It was hyped up big-time before its release for being a pet project of the auspicious developer John Romero, who made his name working on Doom.  John Romero himself played no small part in this - he registered countless merchandising trademarks for the game years before it came out, and even ran a notorious magazine ad simply proclaiming "John Romero is about to make you his bitch" while saying nor showing nothing of the actual game.  But as Daikatana's development dragged on for over five years, it ultimately would require something on the order of 2.5 million copies sold to break even; however, news that it was still running on the now-outdated Quake II engine, as well as an atrocious multiplayer-only demo and rumors of behind-the-scenes drama at Ion Storm soured many fans well before it released.  It fared no better when it actually came out, getting pitiful reviews across the board and ultimately barely breaking 40,000 copies sold, becoming a tremendous commercial and critical failure which is still commonly pointed to today as a perfect example of developer hubris.

In between it all, though, a little studio simply called "Will" concurrently developed an adaptation for the hottest handheld at the time, the Game Boy Color.  While the plot is largely identical to its PC counterpart, the game itself very much is not; it's viewed from a top-down perspective with gameplay heavily modeled on the Zelda series, most especially Link's Awakening.  So, while you're still wielding a ton of different firearms and hopping through time in pursuit of a magical sword, it's done with monster-zapping, platforming, puzzle rooms and boss battles and even chibi-style spritework and animation that honestly looks pretty nice on the hardware.  It makes for a surprisingly decent game, and it still stands out today as being a "downport" of a high-profile game that's actually much better than its counterpart.   Physical copies are a bit tough to come by (owing to only being released in Europe), but John Romero also released the game for free on his website several years back, so it's definitely worth a try. 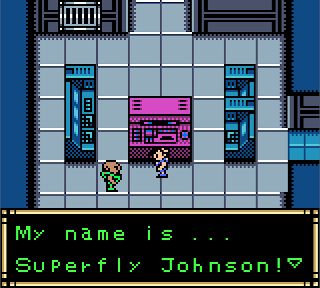