Before true 3D was practical in the realm of gaming, video games took advantage of all sorts of tricks to fake it.  Isometric graphics were one of the more popular choices, letting the player move and interact with the game in three dimensions without actually having to render 3D graphics.  Landstalker on the Genesis puts the isometric perspective to use, with plenty of dungeons themed around platforming, switch puzzles and avoiding traps in between collecting treasure (mostly in the form of gold to purchase items or boosts to your maximum health).  It's all pretty basic stuff (and nowhere near as in-depth as say, Zelda), but it works well enough, though having to constantly press diagonal directions on the Genesis controller's somewhat clunky D-pad does wear on your thumb after a while.  It can also be difficult to gauge high-up jumps at times, especially as there's no shadows under your character or floating to provide a frame of reference for their location in 3D space.  A novel game in its time, worth a look today if you can find it cheap, but there are better options on the Genesis for action-RPGs. 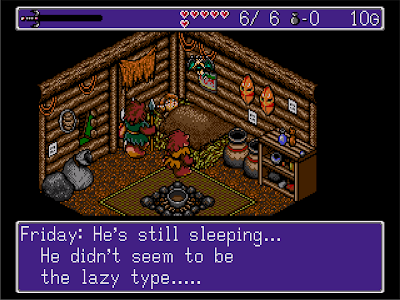