Open-ended immersive sim style RPGs a la Ultima were very rare on consoles in the '90s, and for good reason - the sheer scope and depth of their design simply couldn't be reproduced on the limited storage medium of cartridges while keeping their cost reasonable.  Rings of Power is probably the only one of its type on the Sega Genesis, and it's easy to see why - the game was worked on for nearly three years and had a (for the time) quite high development cost of about $150,000.  Sadly, it also proves that while a game can have a tremendous amount of work and passion behind it during development, that doesn't necessarily mean it's going to be something fun to play.  The scale of the game's world and the detail therein is certainly impressive, but it's no fun to traverse thanks to the mind-numbingly slow, choppy movement the game presents.  Using an isometric tile-based world similar in aesthetic to the PC game "Populous", your characters very slowly move from tile to tile, with only the barest minimum of animation as you do - probably necessitated by much of the ROM space having to be allocated to the world layout and NPC interaction, but still a pretty jarring sight on a console known for games like Sonic the Hedgehog and Gunstar Heroes, which had some of the smoothest animation and fastest gameplay of their time.  Because of the choppy movement and atrocious framerate, it's also difficult to stop where you want to, let alone catch up to a moving NPC and speak to them, and the small viewpoint makes the world quite difficult to navigate through, so it's just not very fun to explore and interact - a deal-breaker for almost any game, but especially so in an RPG.  The tiles and sprites you get to see are nicely detailed, but the clumsy gameplay is made even less bearable by the music, which consists entirely of loud, harsh and seemingly random notes.  The Genesis did have a notoriously twangy sound chip, but it was also capable of making some beautiful and brilliantly composed songs in the right hands; Streets of Rage, Ecco and (again) Sonic were all perfect examples of that.  Combat fares no better, with the player setting actions for each of their characters and battles mostly playing out automatically, with whichever side can spam spells more efficiently almost always being the winner.  So, while undeniably ambitious for the time it was made and especially the hardware it was released on, Rings of Power just isn't much fun to experience.  It's notable for being Naughty Dog's first release on a console (as well as containing an actual nude code that somehow didn't get censored), but with outings like this in their early days, it's a small miracle they went on to become the huge name in gaming they are today. 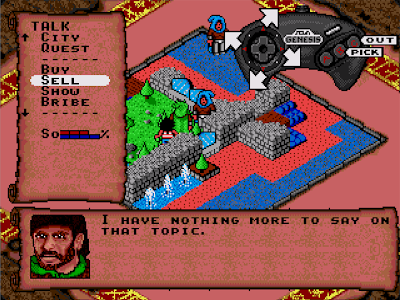