The Sega-owned Shining series is one of their oldest and longest-running RPG franchises, seeing release across a wide variety of platforms and genres over the years and having widely varying quality to match.  Shining Soul for the Game Boy Advance attempts to turn the series into a top-down hack-and-slash somewhat in the vein of games like Diablo, though with very underwhelming results.  The experience just feels shallow overall - you pick one of four character classes, walk through repetitious corridors, battling the a handful of enemies on each screen, slowly powering up and hoping to eventually fell the boss at the end after several hours of throwing yourself at his minions and then him and hoping that's finally enough.  There's relatively little strategy regardless of your class choice, and while the semi-3D visual style looked pretty neat at the time, it's not nearly enough to save it from being a bland experience.  Even in 2003 there were much better co-op action RPG experiences available. 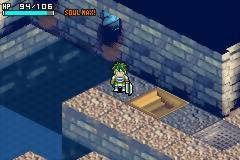