Shining in the Darkness

Most people in the west probably associate the Shining name with the turn-based tactical RPGs on the Genesis, but much less talked about is the series' slightly more traditional origin as a turn-based dungeon crawl.  Similar to games like Wizardry, Shining in the Darkness mostly takes place in a first-person viewpoint, with the player making their way through an enormous dungeon, recruiting two allies to join them in their battles and making frequent returns to a hub town to purchase new equipment, revive fallen party members and so forth.  However, the Shining series' strong presentation shines through even in its earliest outing, with vivid colors, expressive characters with a lot of personality and quite a bit of animation even on enemies you encounter in the dungeons.  Even traversing dungeon corridors is a cut above most, with smooth animation and visible rotations as you turn corners to give it a true 3D feel.  The Genesis didn't have too many other games of this type, but SitD put the Shining series on the map , and proves to be a competent, if monotonous, take on the dungeon crawler format. 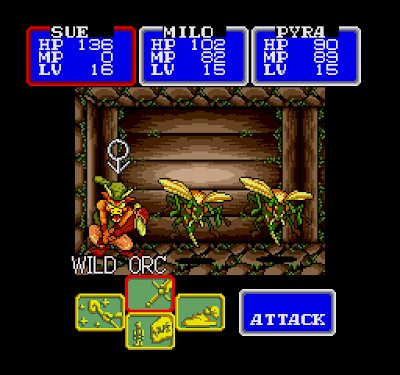