The Megami Tensei series has always had some science fiction elements to it, but Soul Hackers is one of the more prominent examples, taking it deep into cyberpunk territory.  The player is part of a hacker ring called the "Spookies" opposing a corporation called Algon Soft, who have vastly upgraded the tech in the small town of Amami and who have dark ulterior motives in doing so.  As per series standards, demons soon inter the mix and the player pursues numerous virtual worlds in their quest to unravel the dark secrets within them.  The game utilizes the same mechanics as the earliest Shin Megami Tensei games - having to negotiate with demons to recruit them and keep a supply of a resource called "Magnetite" to keep them summoned.  However, demons' personalities also enter the equation; the player will slowly have to earn their trust with gifts or letting them choose their own actions, lest they disobey orders in combat or clash with other demons in their group.  Its also not the series' best in terms of presentation or design - while the VO is quite good for the most part, the music is rather drab and the dungeons are mostly dull (with one standout in the form of an art museum where the player ventures through various paintings to proceed).  Still, its relatively fresh concept makes it another worthwhile SMT title and worth a try. 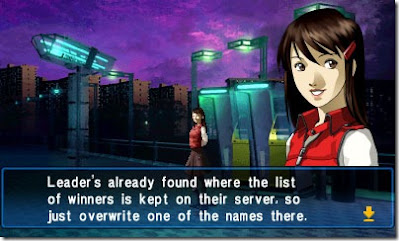