The fourth Shantae game and yet another step forward for the series, with some amazingly gorgeous animation throughout; easily some of the best animated visuals I've ever seen, in fact.  It even has a pretty fantastic theme song called "Dance Through the Danger" with vocals by Shantae's voice actress (the always awesome Cristina "Vee" Valenzuela).  However, it also made the controversial decision to rework the gameplay, going from a largely open metroidvania style of exploration to a more stage-based layout, requiring you to revisit some areas later with new powerups to collect everything (not unlike the Mega Man X games).  It also made the controversial addition of adding DLC missions, adding more content (including the ability to play as Sky, Bolo, Rottytops and even Risky Boots for the first time in the series) and costumes for Shantae herself to change up the gameplay.  It's all quite good quality, though paying $7-8 a pop for it atop a $30 game makes it seem a bit pricey compared to most.  (One also has the option to buy one of the later "Ultimate Edition" releases, which include all of the DLC). 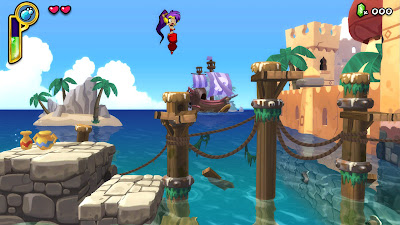