Shantae and the Pirate's Curse

The third Shantae game and, in many players' opinions, the one that really kicked the series into high gear.  The original was rather elusive (and not that fun once you actually got to play it) and the sequel, while substantially better mechanically, was very short.  Pirate's Curse hit the sweet spot, though, retaining the high quality presentation of the series with newly-polished mechanics, storytelling and gameplay to match.  Robbed of her genie powers after the events of the second game, Shantae now joins forces with her nemesis Risky Boots in an attempt to stop a greater evil, acquiring her lost items along the way to serve as tools - Risky's pistol is able to attack and activate switches from afar, her hat serves as a parachute that allows for longer jumps, and a cannon that allows for a triple-jump, among others.  While it still has some irritating elements to its design (blind jumps and cheap hits resulting from them), this is easily the game that paved the way for Shantae's future success, and set a high standard for games to follow. 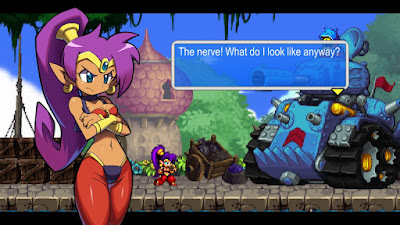