Puzzle Quest was a low-key hit in 2007, combining a match-three puzzle game with elements of turn-based strategy games and RPGs in surprisingly effective fashion, and it was popular enough to appear on almost every platform of the time.  Two years later a spinoff game set in a 4X-style space setting would appear, and unfortunately, it did not fare nearly as well.  The game now used a hexagonal grid with variable gravity depending on whether fights took place in orbit or in space (with the former causing new pieces to slide in from the top while the latter would cause them to come from whatever direction was closest to the board's edge) and reworked mechanics to have ship shields and weapons.  It is because of the new layout, however, that the game becomes an exercise in sheer frustration.  Clearing one combo in the center of the board can - and frequently will - cause new pieces to slide in and set off huge chain reactions that refill one player's shields (basically free health regeneration - something the original implicitly avoided), inflict massive damage to their opponents and give them more mana to do more of the same, and will frequently grant an extra turn on top, so every fight feels less like a battle of strategy and more like a roll of the dice to see who can set off a battle-deciding mega chain first.  The game adds diplomacy and crafting systems that use similar board mechanics too, which just results in more of the same frustration, and the fact that one's only decent means of making money is winning fights to get resources to sell makes it a grind-heavy game to boot.  Galactrix stands as proof that tampering with a simple, but effective formula can be disastrous. 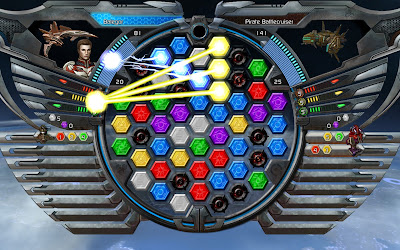