Technos properties have bounced between more companies than any other I can think of, with results generally ranging from average to downright terrible. WayForward's Double Dragon Neon, while somewhat clunky to play, was one of the better attempts, capturing the platforming and OTT style of Double Dragon while mixing in a self-aware sense of humor.  River City Girls is the followup to that, carrying over WF's irreverent sense of humor (with some very funny and oft-improvised dialog by Kira Buckland and Kayli Mills) while polishing up the gameplay to match RCR's fast-paced, responsive and upgrade-oriented style.  The end result, while a bit overlong and repetitious, nonetheless ends up being very entertaining, especially if you can find a friend to play through with in co-op. 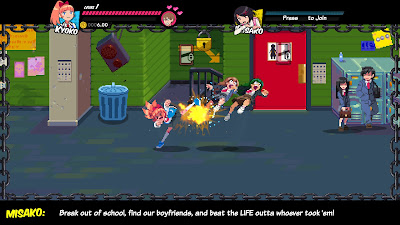