The original Puzzle Quest became a pretty well-known and popular game with a lot of ports, sequels and licensed spinoffs in a relatively short time, but not too many people talk about its sequel.  Not because it's a bad game - it's got sharper graphics, a grittier style and somewhat more varied gameplay, including slight variations for things like picking locks or breaking down doors - but because it just doesn't add much to the format that the original game didn't already have.  Things were more over-the-top in the original game and even surprisingly grandiose, having you work your way up from mundane skirmishes with orcs to building up your income, managing a castle and staffing armies for large-scale sieges, but this one stays more grounded, being a pretty straightforward (and extremely linear) fantasy story with your character moving from arrow to arrow and being bombarded with constant text boxes about what's happening and what you're fighting next.  It also lacks the expansions the original got that added more quests and playable classes (a grand total of thirteen in the Switch version), so you're back down to four classes again, making it feel significantly smaller in that regard too.  It's still an entertaining blend of match-three puzzle game and RPG with a lot of strategies to figure out and character customization to experiment with, but following in the footsteps of such a strong first game makes it feel a bit lackluster in comparison. 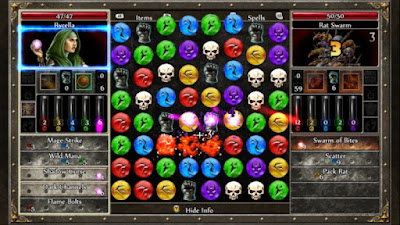