An original RPG offering from Matrix on the DS sounded like a promising idea.  After all, they were behind the Alundra series and several remakes for the Final Fantasy and Dragon Quest franchises, so they clearly have an eye for what makes RPGs work.  But what makes an RPG function and what makes one distinct and memorable are two very different realms of expertise.  Like many, Nostalgia's developers don't seem to recognize that classic RPGs' appeal was not looking a certain way or adhering to rigid design customs even to the detriment of the gaming experience, but because they made efforts to stand out from the pack. Whether a strong presentation or an engrossing storyline or gameplay that felt more streamlined while losing none of the depth, old and new RPGs alike are scarcely remembered for going through the motions. Nostalgia never got that memo, proving its dated design philosophy right away with all-too-frequent frequent random encounters, unengaging mash-A-to-win battles and the all time low bar for introductory quests, killing rats in a switch-flipping sewer maze level.  But even if you somehow still keep playing after that, the lack of any decent story hooks, interesting characters or anything else to do other than more tiresome monster-bopping quests in the same vein quickly made me put this one down and never look back.  Nostalgia certainly isn't the word I would choose for this title; maybe they should have gone with "Ennui" instead.  Or perhaps "Blasé". 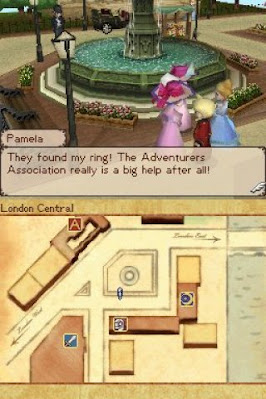